Last of 3 games today at Heath Park was the lads vs Hempnall Reserves. Hempnall ran out comfortable winners in a preseason friendly and probably rocked up really fancying their chances. The match began after an impecably observed minutes silence from both teams.

Both teams started the game quicly and as expected tackle were made with authority, We settled the quicker and really got a grip on the game creating chances with in minutes of the kick off, Luke Williams running the channels well on the left with Josh Haycox cutting in from the right to support centre forward and captain Callum “Billy” Cockram. The returning Declan Moore gave away the first free kick of the game with a biting challenge in the centre of the pitch. Dec was supported in the middle of the pitch by the magestic Louis Stimpson and dynamic Brad Cannell. The Midfielders and Forwards were finding each other in good positions and Dec found Josh Haycox who slotted home for the first of the game.

We kept pushing and working hard and Billy caught out the opposition defence with a press nicking the ball away from the defender and rounding the keeper to slide in the second. HT

Hempnall tempers started to flair not long after the break as we set about moving the ball around the back before with both Thomas Stones and Lewis Jarrett stretching them down the flanks with passes into the wingers. Liam Plunkett had replaced Luke Williams and soon found Haycox who netted his second of the afternoon. Then two became three as Haycox he has picked his way through the Hempnall defence for a fantastic solo effort. 4-0. We continued to play quickly and set traps for Hempnall quick throws from Keeper Ed Leviseur out to his fullbacks Pete Turnbull and Ryan Stannard were always too tempting for the Hempnall midfielders who were quick to press and even quicker to be passed around with the ball played into the central areas they had vacated. Louis Stimpson made the most of these areas and found pass after pass into the forwards.

Josh Dale almost made 5 as he rattled the post from a tight angle. Jamie Dugdale making his first competitve appearance in a few years hasn’t lost any of his pace at the grand old age of 38! 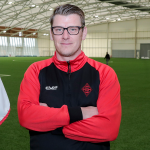 The Men are back in league action